Ep.6 | Play Every Shift Like It's Your Last with Sean Venedam

In this episode we hear the incredible story of former professional hockey player, Sean Venedam. Sean recounts his experiences of battling adversity and overcoming mental obstacles on road to recovering from a traumatic injury. 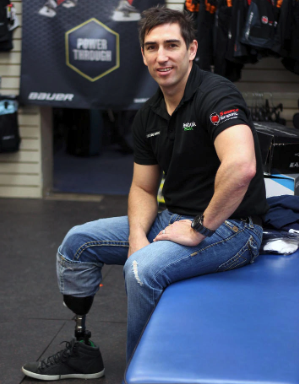 A former OHL star and professional hockey player, Sean Venedam embodies what it means to be a captain.

A talented and hardworking player, Sean played in the Ontario Hockey League for the Sudbury Wolves where he capped his career with a 47 goal season. He then moved on the play in the AHL and ECHL from 1998-2008. In his 2008, season his career ended with a break to his tibia and fibula, requiring eight surgeries and ultimately an amputation.

Sean opens by walking us through his decision making process of playing in the OHL vs. U.S. College. He then moves on to discuss various aspects of his career as a captain, dominant OHL player, and ultimately his stint in professional hockey.

As his professional career progressed, Sean found himself on the wrong end of a horrific collision in his 2008 season. The hit resulted in a break to his lower leg, eight ensuing surgeries, and ultimately an amputation. He revisits the incident and takes us through his mindset on overcoming adversity as a player and as a person. The discussion continues with Sean discussing the adjustment to his new way of life and the years that followed up to his gold medal win with Team Canada.

Sean maintains an incredible outlook on life and is a great resource for anyone struggling with mental or physical obstacles in hockey, or in life.

This is an incredibly motivating story and a must watch for all young hockey players. Enjoy this episode with Seam Venedam!